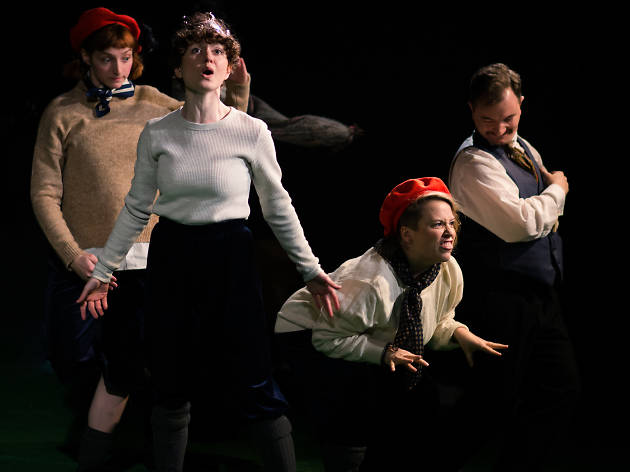 From the creatives behind The Great Gatsby in the same venue last year, The Guild of Misrule and Theatre Deli are running their new musical adaptation of the Peter Pan story as the centrepiece of the much expanded Vault Festival.

To begin, the audience must crawl through a bed before coming into the area in which the show takes place. It starts off as most Peter Pan adaptations do, in the children’s bedroom, before veering off into more musical and serious directions. The songs played by the talented cast are excellent for the most part though, being the first night, there are some issues with the sound quality and projection for some of them.

The action is not limited to the one space, so the audience have the opportunity to wander with the characters into separate rooms for more intimate moments. And do be warned – there is audience interaction, if that sort of thing isn’t to your liking. Though if you are a good dancer, then you may well be in your element.

It is an inventive and, at times, moving 100 minutes overall: the show heavily leans into Peter Pan’s history as a metaphor for WWI in some instances, to elegiac and emotional effect. It doesn’t follow the Peter Pan story precisely, but it certainly covers the main plot points. The acting is uniformly good, with the cast switching roles seamlessly, and the performances consistently energetic and lively. There are certainly a few technical teething issues, and there is a little too much expositional padding at the beginning of the show. Overall however, this is an extremely good production, and one which is heartily recommended.