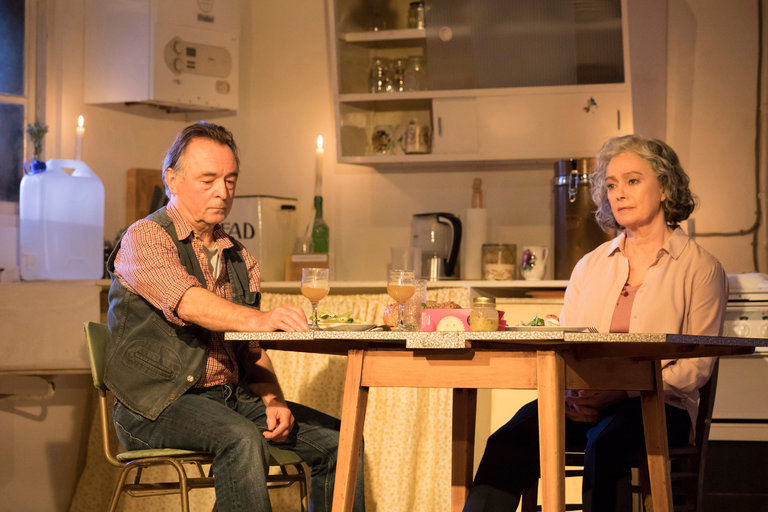 American dramaphiles tend to view Britain as a hotbed of hyper-verbal and hyper-intellectual plays, especially in comparison to our home-bred musicals that often lack the same resonant depth. This is of course a gross over-generalization with countless exceptions, but personally, I became a card-carrying theatrical anglophile thanks to the massive transatlantic influx of Stoppardian texts in which characters talk talk talk about Serious and Important Ideas.

The Manhattan Theatre Club importing the Royal Court’s production of The Children to this venerable nonprofit institution’s Samuel J. Friedman Theatre on Broadway not only conforms to this trend, but also serves as sort of microcosm for this brand of dramaturgy’s strengths and weaknesses.

Lucy Kirkwood’s play centers around a love triangle of people who once all worked at a nearby nuclear plant, which sometime in the past had a catastrophic accident that devastated their seaside town. Relying almost exclusively on two-hours’ worth of conversations between the three, their seemingly endless barrage of words explores the relationship between agency and responsibility. If you participate in something that ends up hurting others, even if you weren’t totally in charge of the harmful outcome, are you obligated to atone for your involvement – no matter the degree of sacrifice – by helping the uninvolved who will nevertheless still suffer from your past actions in the future?

Though this question is always relevant, it feels especially so in this current sociopolitical climate that’s seen the likes of Brexit and Trump basically disregard the concept of collective aid, replaced by an ignorantly ahistorical notion of privileged individuality. But the importance of tackling this topic right now underscores the production’s struggles with communicating Kirkwood’s insights on the matter.

Since she predominantly utilizes speech to convey her thoughts, the viewer must pay strict attention to the cast’s every utterance. Yet audiences tend to zone out when faced with a single form of theatrical discourse, thus the reason director James Macdonald deserves some criticism for staging the play as written instead of devising an approach that actually conversed with the play. Diversifying the means of theatrical storytelling on display by adding elements to layer the experience would’ve provided needed windows into the subtext of the characters’ chats, which operate on multiple levels, rarely pertaining only to what they’re talking about on the surface.

The most memorable aspects of the production are those that deepen the text in this way. For instance, Miriam Buether’s set design immediately establishes a world literally turned on its axis, symbolizing the effects of the aforementioned blast they try to ignore that still unavoidably alters the literal foundations of their existences. Their abode appears on a slant, and almost like it’s a floating box amidst a void-like expanse of negative space. This external disconnect from the real world outside their doors emphasizes their internal attempts to distance themselves from caring about the impact of their previous decisions. Yet the projected ocean that floods their walls at the end, courtesy of projection designer Peter Mumford, represents the futility of trying to do so.

More abstract flights of stage fancy like these throughout could’ve further engaged audiences who customarily become bored with largely nonstop, unvaried verbosity, especially with plays that contain very few present plot events (most of which here are imparted through discussion instead of shown). This lack of expressionistic imagery is made all the more apparent by the powerful moments of physical theatricality that the script explicitly calls for, which Macdonald brings to vivid life: the hand-cleaning of a child’s bicycle, a bloody kiss, a group dance sequence, the concluding yoga session. These instances pack more of a punch than the verbal rest because of their juxtaposition, and Macdonald contributing more like them would’ve prevented minds from potentially wandering due to the tsunami of words.

For years, theatre’s been the preferred medium for language-based art. Since cameras can create practically any image, hyper-verbal pieces have been “relegated” to the stage. Yet at a time when even the digital sector has become overrun with unreliable words thanks to social media discourse, theatre pieces should be able to harness the undeniable energy and substantive meaning generated by the thoughtful movement of bodies through a shared space. If all forms of text can be “fake news,” live entertainment reminds that real life is grounded in the corporeal reality of our human bodies, including the ones behind internet identities that seem so polarized nowadays as to be different species. The more theatre can utilize visual storytelling, the more audiences will listen to accompanying language. Theatre should mirror how we relate to and thus understand the world around us: through a balance between bodies and words.

Kirkwood’s undeniably a talented writer full of deep insights concerning a wide range of subjects, but at least with The Children, she would’ve benefited from a seasoned director expressionistically conversing with her impressive dramatic voice.

The Children runs through 4 February.