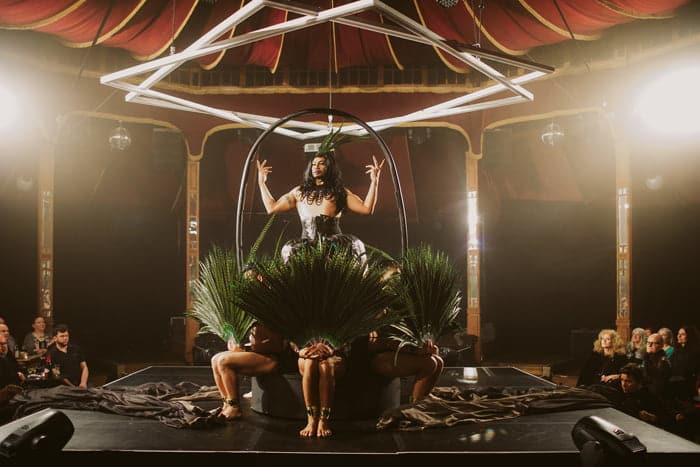 Theatre can plumb the depths of despair. It can elevate human glory and achievement. It can stir the heart and still the soul. Or it can throw a fabulous party on a rocket ship full of bearded drag queens in sequinned thongs.

Aussie boylesque company Briefs returns to London with their latest variety show Close Encounters, a queer celebration of circus, subversion and stripping. The escapist cabaret with a B-movie aesthetic does precicely what the hostess promises – it whisks us away from our messy, violent world and takes us a place of deviance and fun.

The cabaret throws stripping and tease to the forefront, with circus acts added for variation. Majestically bearded hipsters begin with a jungle parade, peacocking in lacy pants with palm frond fans, then move into ’70s outer-space ostentation. It’s in this style that Close Encounters finds its feet, with Frank ‘N’ Furter-esque drag queen Fez Fa’anana at the helm of the ship.

The boys play with the confines of gender in sparkly heels, false eyelashes and unquestionably male bodies. They are simultaneously manly men and amazonian queens, inviting us to be whoever and whatever we want to be. Human connection and expression is celebrated as we’re asked to enjoy ourselves and put away our phones. Hen dos sit alongside men and women of all ages and persuasions looking for a laugh and a bit of escapism. The Briefs boys unquestionably deliver with precise physical performance and colourful, lush design.

Though physically impressive specimens, there’s a cheekiness and warmth in the acts that unfold. The circus is smart and unassuming in its execution, with striking arial hoop work, juggling and acrobatics. Other than the costumes, there’s little ostentation in these sections. The burlesque is sassy and slick with tight choreography and casual confidence, which quickly charms and seduces the audience.

A vintage film and telly soundtrack mixed with modern electronica assuage any doubts of this being anything other than a celebration of kitsch and camp. The costumes integrate well with the sound design, though there are some stylistic anomalies that break the outer space illusion. A steampunk white rabbit with ringing alarm clocks aids the transitions between acts before having his own act. Whilst he’s a joy, he’s totally out of place with the shimmering greens and blues and electrobeats of the other creatures we meet. This design choice along with the rabbit’s faded Victoriana pull us back to earth rather than sends us into the stratosphere.

But the show is unquestionably fun. Popular entertainment at its sassiest and smartest, it’s neither too weighty nor too fluffy. The queerness gives it a sharp, permissive edge but it’s full of laughs and celebration of our wonderful humanity that refuses to be put in neat little boxes.