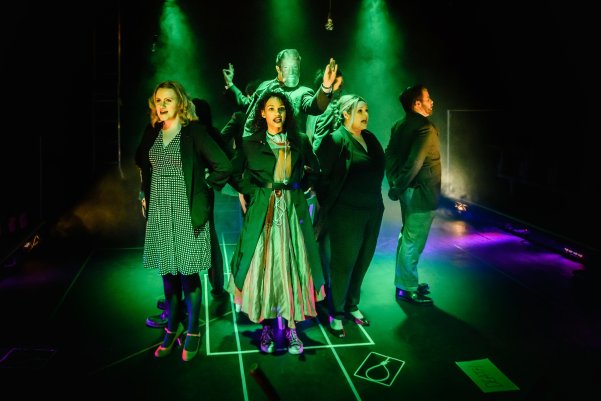 London in 1728 was a dark and dangerous place. Highwaymen, hangmen and harlots roamed the streets and life was hard. John Gay’s satirical musical The Beggar’s Opera steps away from the traditional romanticised stories of heroes and villains, unrequited love, choosing instead to tell a tale of rogues and murderers. And a little bit of love, for good measure.

Polly Peachum (Michaela Bennison) has defied her parents and married the notorious highwayman Macheath (Sherwood Alexander) However, he has most certainly not forsaken all others. Wanted for his crimes, he leaves Polly with a promise to return.

Lazarus Theatre have taken David Gay’s story and brought it into the 21st century with a bang. Literally – there are party poppers. It’s a whirlwind of a tale – quirky and fun, transcending the centuries and combining modern day with the past.

Performances are strong from everyone, with the cast acknowledging the audience with intense stares throughout, involving them discreetly yet hardly breaking the fourth wall. The staging is simple yet effective, with ladders, coloured masking tape and a few pieces of furniture whisked on and off, and the cast adopting masks and a few props as they switch from key character to chorus.

Singing is good, but feels a little strained in places. However, this does not detract from the story (adapted and directed by Ricky Dukes), and the new lyrics (penned by Bobby Locke) are both clever and amusing.