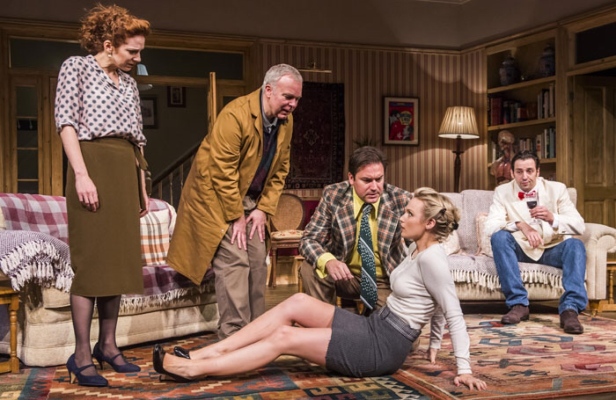 Ellie and Richard live a comfortable, domestic life in 1990s little England. Only their marriage is in pieces because Richard can’t bear the thought of touching Ellie, who just wants to get knocked up and have a child like their friends, Nick and Lisa. Richard’s too busy with his work as an obstetric surgeon and his amdram-esque club of British comedy, the Dead Funny Society. When Benny Hill dies and he tries to arrange a party to commemorate his life and work, all doesn’t go to plan when his private life and the public party collide.

Terry Johnson’s 1994 play functions both as a cleverly interwoven tribute to old school British comedy and a domestic drama, with a good balance of comedic and serious moments. But even though the play is only a couple of decades old, it occasionally feels its age. There is also a particularly dubious casting or directorial decision that is, quite frankly, incredibly racist.

Johnson’s first act is the stronger of the two, though the start of a stereotypically bickering couple takes a bit of time to develop. Once it picks up, the moments of hilariously staged sexual dysfunction between Ellie and Richard are the funniest. Act two, starting with the party for Benny Hill, quickly loses its way in a mire of impressions of comedic sketches where little else happens. The four society members who turn up are wearing some sort of semi-fancy dress with the white Nick (Ralf Little) dresses up as an East Asian character complete with gobsmackingly offensive accent. There is no reason why this role couldn’t be played by an East Asian actor, or Johnson (who also directs) could make a different accent choice. Once the plot moves away from the play acted in-jokes and returns to the collapse of a marriage it vastly improves, crescendoing into a satisfying mix of slapstick and emotional trauma.

Of the cast of five, four are fantastic. Katherine Parkinson as Ellie particularly excels with her sarcastic, deadpan delivery. Though she alienates the other characters, the root of her bitterness is moving – she just wants a husband who loves her. Steve Pemberton’s camp Brian is utterly delightful with his good intentions and genuine care for his friends. Ralf Little is the weakest (though not bad by any means), with occasional moments of awkward delivery.

Most of this production is reasonably enjoyable, though the script is a bit baggy with the comedy references. The mix of genres keeps the story from being too light or weighty, but the performances are the best part of this production. Even with the old fashioned gags and racism, it’s a fun show.