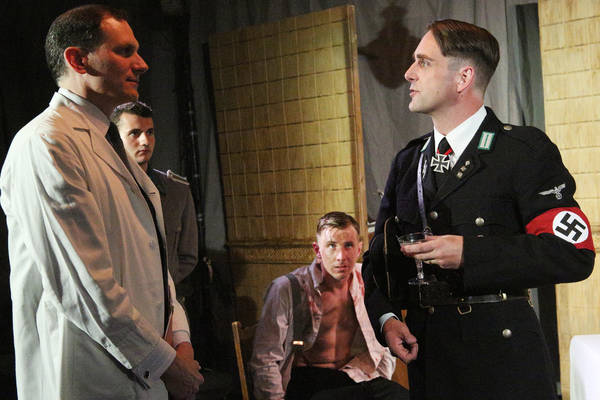 Denmark in the mid-1930s was a great place to be if you were gay. Homosexuality was legalized in 1933 and a thriving club scene allowed gay men to meet and socialize publicly. But as the dark cloud of National Socialism swept Europe, safety became more precarious. Dr Carl Vaernet was one of their threats. A practicing GP with an interest in hormone therapy, the Danish Nazi Party member soon captured the attention of party higher ups with his therapies that he claimed cured homosexuality. Hired to cure gay prisoners at Buchenwald late in the war, he experimented on seventeen inmates before the war ended and he escaped to Argentina.

Claudio Macor’s latest play Savage focuses more on the story of Nikolai and his American boyfriend Zack than Dr Vaernet, but the lovers are soon separated and Nik becomes one of the doctor’s victims. The emerging subplot of an SS officer and his secret, gay love slave quickly becomes just as important as Nik and Zack, making Savage more of a play about homosexuality in WWII than specifically about Dr Vaernet and his horrific medical experiments. Spanning several years and multiple narratives, the script, sadly, doesn’t give in-depth attention to any particular character; individual stories are disrupted and incomplete. This would be a much more compelling text if Macor focused attention on one primary character rather than taking a scattergun approach. All of these characters have potential to steer a rich, interesting play that focuses on them, but none of them get the full, individual attention they deserve. There are some great set piece scenes, but the overall structure lacks focus.

Some of the performances are inconsistent and the cast present a range of styles, which distracts from the seriousness of the plot. There are a few good performances, though. Gary Fannin cuts a cold, scientific Dr Vaernet with a clear disgust for gay people; this professional face of homophobia and calm hatred is a most chilling one indeed. Emily Lynne as the doctor’s nurse viciously opposes the Nazis and blatantly defies their rules in a display of ferocious persistence. She’s a great contrast to the doctor’s calm hatred. The two pairs of lovers have moments of genuine care for each other, whereas other times feel forced.

Jamie Attle’s costumes are sharp and detailed, whilst David Shields’ set of rotating panels clarify location but are a bit clumsy. Macor also directs, ensuring his political messages get across but an additional pair of eyes could have developed more intimacy between the couples.

Though the topic is most serious indeed, there’s a distinct lack of joy in the beginning cabaret scene and between Nik and Zack. Macor clearly wants to raise awareness of the horrors of Vaernet’s work, but some lighter moments of exposition would emphasise this further. A dramaturg would not go amiss in order to streamline the script and performance styles in future productions, but this premier still has potential and exposes a historical figure too easily forgotten amidst more prominent Nazi war criminals.

One thought on “Savage, Arts Theatre”