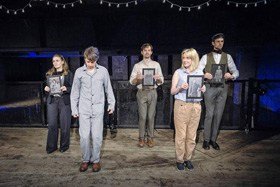 The pool preserving the remains of The Rose Playhouse is the sea surrounding a nameless, remote island. Fascinating, dangerous, wild or wonderful, all of the island dwellers have lengthy, close relationships with the sea, for better or worse. These intertwining, turbulent histories meet and join each other at the Old Man and his Boy, a story of a new, young love and a past love, long lost. Heady Conduct’s Reckless unfolds a timeless tale of love, truth and community dictated by the sea using narration, site-specific influences and direct address interspersed with conventional performance. The story is both sweet and saddening, but the play’s structure is disjointed and thin, occasionally unclear in time and place, causing the story to lose support and clarity. Fortunately, the scenes between characters are endowed with honesty and intimacy, and the unique performance venue is fantastically utilized by director/actor Rebecca Rogers.

Rogers is the central narrator figure, the Harbour Master. She is the all-seeing and all-knowing, performing with a reserved omniscience. Rogers also plays the Old Man’s dead wife, a quiet enigmatic character often referenced but rarely seen. She’s a wonderful, etherial presence when she does eventually appear. The other living characters have more energy, particularly Alison Tennant as feisty, confident Girl that shy Boy falls in love with, and Blake Kubena as the Old Man, father of Boy. Kubena’s Old Man is a ball of pent up mourning that’s become a threatening obsessive, controlling his son’s every move. Though there is no issue with their performance, Kubena and Simon Rodda’s Boy look like they could be brothers in their late 20s or early 30s, not an elderly man and his teenaged son. The lighthouse keeper, played by Edward Bijl, is a watchful outsider trying to engage with the native islanders though never succeeds, resorting to desperate measures to fit in. Though the character provides some comic relief, he contributes little to the story and provides minimal plot progression.

The general atmosphere is good; atmosphere is vital to make a successful show in such a vast and unusual performance space. It gives productions here specificity of location and time period, otherwise the dark emptiness beyond the stage dwarfs the play. Nautical elements deck the back wall of the site, a hut perches precariously on the water’s edge, seagull puppets and some good sound design add specificity. The lighting isn’t fully utilized to create mood, nor does it do much to counter the sweeping grey ceiling and walls, but this island could be in a location that’s perpetually cloudy.

The use of ritual and tradition gives the story gravitas; the Harbour Master’s Festival of the Lost is a moving tribute to those drowned at sea. It connects the characters to each other and to the island, helping to counteract the loosely fitting scene structure. It also emphasizes the seriousness of the small twist at the end where the audience learns the details of the Wife’s death, and the gradual muddying of the truth with the passage of time. The most moving plot point is Boy giving a ring of his mother’s to Girl, inscribed with a medieval French saying, “pences pour moye du” or “think of me, God willing”. Historically, this ring was found during the Rose’s excavations and now lives in the Museum of London (The Rose sells replicas in its giftshop). This is a delightful nugget of Rose history bonding the theatre to this particular production.

Though Reckless is in the early stages of its expansion into a full production from a one-person show, it still needs more flesh on its skeletal frame. There are great characters and the love story at its core is wonderful, but its dreamlike atmosphere needs more detail to make the world of the play truly believable. It’s most certainly achievable, and this play will develop its sea legs as it continues its development.