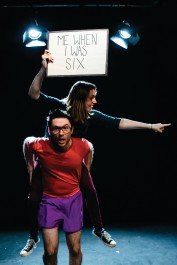 Hannah used to love running with her dad. When she was 17, her dad died and Hannah kept on running, silently and alone. She refused to speak about his death with anyone, including her family. So she decided rather than to navigate the burden of speech, she would create a silent play that tells her dad’s story and her process of dealing with his death. So It Goes is a sweet two-hander that manages to avoid over-sentimentality by focusing on the honest, deeply individual story of navigating life after the death of a parent.

Other than the last line, there is absolutely no speech in this play. All text is written on small whiteboards worn around the actors’ necks or on pre-made signs. This keeps written communication basic; it is rather like watching a comic book or graphic novel being written. This could occasionally feel slow and it was often easy to predict what was coming next on the whiteboard within a scene, but not overly so and not often. The set and props are also simple, with signage and symbolic items representing other characters and jumps in time and place. Most props are drawn outlines of objects, adding humour and a sense of youthful play to the story. The physical performance style matches- it is exaggerated but simplified, physical theatre but not ornate, embellished or for the sole purpose of showing the actors’ physical prowess. So It Goes wants to tell Hannah’s story as clearly and simply as possible, focusing on truthfulness and emotional honesty. The look of the play would certainly appeal to children, but accessing adults’ inner child makes the experience of losing a parent a journey that ends with positive reflection rather than the bitterness of loss.

The performances are equally lovely. Hannah Moss plays herself, and has “help” telling the story from David Ralfe, who plays her Dad and Mum. Ralfe in drag has an initial hit of comedy, but he taps into Mum’s outward expression of hopelessness that soon makes the audience forget that it’s a bloke in a dress. The two actors embody an exaggeration familiar to children’s theatre that is also in keeping with the cartoon aesthetic of the production, but is not crude. If they did not employ the exaggeration or humour in their physical comedy, it would make audiences want to slit their wrists. Instead, there was a lot of sniffling and nose blowing mixed in with laughter.

This is the third play I have seen about death in recent weeks. Each production used a dramatically different approach to convey the same message. Hannah spelled it out for us by writing that her dad “didn’t just die, he lived.” There’s an overabundance of factors in the world that can easily depress us and forget to look for the little moments of daily joy in our own lives, but So It Goes provides a celebratory reminder to do so through a pared down, visual-textual hybrid of physical theatre. Though the tour has now finished of their debut production, On the Run Theatre is certainly a company to watch.