Chris Brett Bailey is a bard of th 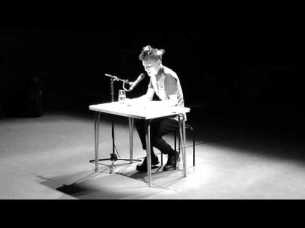 e modern age. Like Elizabethan theatre the audience went to hear rather than to see, This Is How We Die is a bombardment of the ears rather than the eyes. Using spoken word and beat poetry to tear open the world as we know it, Bailey forces us to confront the horrors and beauty of everyday existence. This piece of theatre moves away from the trend of visual theatre, taking the audience on a self-reflective ride of their lives.

At just over an hour, we are hurtled on a journey through Bailey’s rage against “-isms” and “-ists,” a brutal first meeting with his overly-literal girlfriend’s parents and a Hunter S. Thompson-like roadtrip through the American desert. His delivery is relentless, pausing only for comic effect or to take small sips of water from the glass that sits on his desk. Yes, a desk. He sits at a desk, with his script in front of him. This form rails against the increasingly visual culture we live in but it forces the audience to really and truly listen. He has a lot to say that he feels strongly about and you need to hear it.

Trying to describe what This Is How We Die is about is futile. Anything descriptive about plot or narrative arc will make this piece sound simplistic and trite. The feature that really makes this a must-see is Bailey’s visceral use of language. He savours it, relishes it and throws it away. A sea of sound washes over us, then pummels us, unarmed, in a back alley behind some dingy American bar. His imagery alternates between abstract and concrete, the highlight being his girlfriend’s neo-Nazi father left shaped like a swastika after a car accident.

The last ten minutes or so abandons speech, instead favouring live ambient music and harsh lighting. This is his Elizabethan jig, the audience’s catharsis after the emotional Sturm und Drang of the last hour. There was no point in fighting the journey of This Is How We Die so you may as well join him. Share in his rage, his joy and his passion. Relish the world you live in and the sounds of the words that pour so easily from his mouth. This isn’t about how we die, but how we should live.

2 thoughts on “This Is How We Die, Battersea Arts Centre”