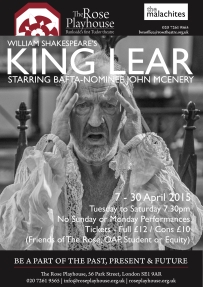 Last summer, I left The Malachites’ Shoreditch rooftop A Midsummer Night’s Dream lukewarm. I hoped their current production of King Lear, currently running at The Rose Playhouse after a transfer from Peckham Asylum, would be a more unified, consistent production. Fortunately, these hopes were not just met, but exceeded. With an outstanding cast headlined by John McEnery, original Early Music accompaniment and a full utilization of the unique performance space at The Rose, it far surpassed my expectations and proved to be an exemplary showcase of the potential at The Rose and of fringe Shakespeare.

Due to the vastness of the theatre, its large pool of water and only a relatively small section of the space able to be used, design and staging are particularly crucial in order to make productions here feel polished and professional. Trying to ignore the size and feel of the space simply does not work and diminishes the historical importance of the venue. Director Benjamin Blyth embraces these characteristics. He clothes his performers in neutral blacks, whites, grays and browns. Even the Fool was blandly dressed. The costumes were generally contemporary winter dress with a Russian or Eastern European look. Furs, capes, leathers, scarves and multiple layers abound but the odd piece of costume was jarringly and frivolously classical, such as Oswald’s cloak. The drab colours and mostly angular lines match the concrete expanse that stretches out from the stage. Though the play is set in cold weather, the obvious winter wear also highlighted a man’s struggle through the winter of his life, and made Poor Tom’s near-nudity all the more ghastly. A simple throne and wooden chairs were the sole set pieces; stark white lighting emphasized the grim realities of Lear’s treatment by his family and decent into madness. Some direct address was used, but the audience felt sufficiently included due to the small playing area. The pool of water preserving the Rose’s foundations doubled as a lake or seaside and Poor Tom’s hovel was a fort of black drapes in a rear corner. The musicians were dark silhouettes to the side of the pool. Most of the action took place on the tiny wooden platform stage, but the rest of the site was not ignored. Blyth set Lear’s world at the edges of sanity, existence and human decency and suited the production’s look and feel to the venue with great skill and intuition.

There was not a poor performance in the company and due to this being a transfer, the ensemble and their chemistry came with ease and depth. There were some unique and refreshing character choices, such as Cordelia (Emma Kirrage) played as mature and practical in the beginning rather than innocent and naïve, as she is often portrayed. David Vaughan Knight gives us a stern, militaristic Kent and shows a wide performance range through his character’s disguise and devotion to Lear. William De Coverly shows similar ability in his portrayal of Edmund, skillfully manipulating Gloucester and Edgar through status, movement and voice. Samuel Clifford’s Fool is extremely intelligent with moments of deadpan and quiet sarcasm, drawing more attention to Lear’s mental collapse. I could listen to Anatole Gadsby (France and doctor) read a shopping list in his mesmerizing speaking voice; he will make a great Hamlet with his intensity and watchability if he hasn’t already played the role. Claire Dyson and Orla Jackson are deliciously evil as Goneril and Regan. Finally, John McEnery as Lear brings over half a century of Shakespearian expertise, fully committing to this sensitive, fragile old man who falls victim to the cruelty of the changing world around him.

Though this is an excellent production, it is not flawless. Dr Deborah Pritchard and Danielle Larose composed the original music for the production. Atmospheric and haunting, it was beautifully written and well-used in moments of high tension, but could have been used more often. It was unobtrusive enough that the entire play could have been underscored with carefully chosen moments of silence instead of the other way around. Stage combat sequences can be longer, with Edmund and Edgar’s fight lengthened to show the inherent conflict between the two characters. The scenes were quick and transitions energetic, though some of the energy dropped in the intimacy and quiet of the final scene between Lear and Cordelia. Though it was intimate and moving, the small scale of it did not quite carry through the venue.

These issues are minor, however. The high level of talent and creativity in such an intimate and unique venue is extraordinary, and certainly worth catching whilst tickets are still available.

One thought on “King Lear, The Rose Playhouse”