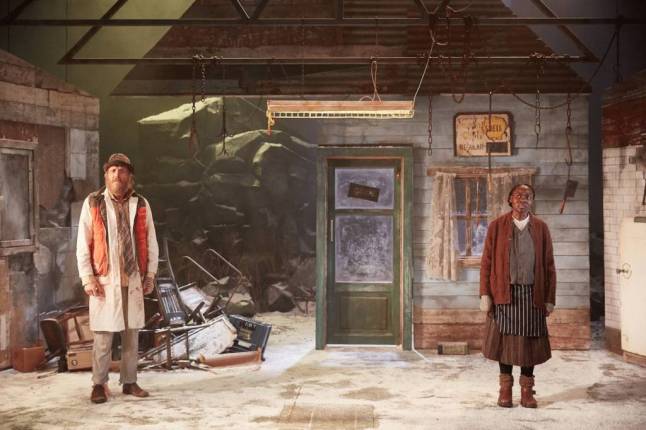 Rhys Ifans’ performance of John Daniel evokes a theatre clown, and one that is plagued by grief for all that he has lost. Though often tragic, his heightened performance makes the dystopian setting even more unreal and unsettling. Along with Jason Hughes as a traumatised Captain separated from his unit, he further stretches and distorts this world where time has simultaneously stopped and raced ahead. Designer Cai Dyfan’s set supports this feeling of time stretching into an increasingly diaphanous web. Though it begins as detailed and naturalistic, the gradual disappearing of entire walls to reveal swathes of white nothingness is like the gradual decay of memory and perpetual fading of an individual’s impact on the world around them.

Raki Ayola plays John Daniel’s wife Noni, a devoted woman with quiet strength who provides a good deal of groundedness that the more volatile male characters do not. Her focused calm is more nuanced and subtle as well, though she is just as much of a victim as the others. The sadness that she emanates gives the production a grounding in the near future that makes the events that have unfolded all the more convincing.

Ed Thomas’ story of being left behind and trying to hold onto the memories that give us a sense of self is both moving and disturbing, and crafted with care and sensitivity. There’s just enough real life to counter the heightened and surreal elements, and warn audiences of the dangers this rapidly changing world is thrusting upon us. We can either move with the times, either with acceptance or resistance, or live in past memories that gradually dissolve into nothing.

On Bear Ridge runs through 23 November in London.

One thought on “On Bear Ridge, Royal Court”