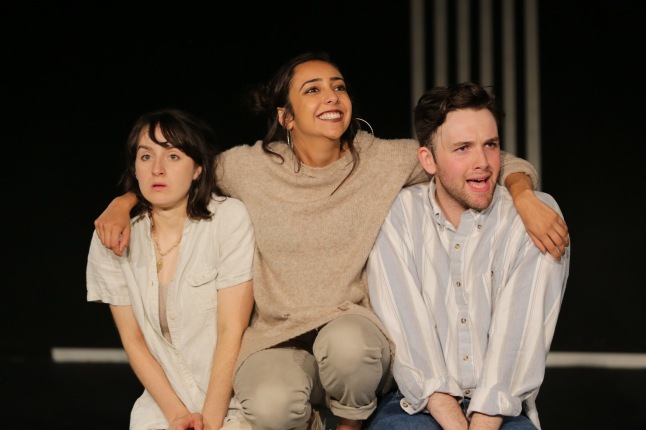 Four stand mics and a similarly numbered ensemble create a busy, noisy world of Skype calls to Sean’s family, app notifications, club nights and one-night stands. The quiet moments stand out all the more with this approach, though Sean is often so overwhelmed that it’s difficult to hear him. Otherwise it’s a fitting, stylistic choice that accurately captures how stimulating modern life is.

John King’s script has some Greek myth references that give it a nice touch, but doesn’t add much to the totally contemporary story. It’s very much set in the here and now, and any classical parallels are lost. The exposition takes a touch too much time to build and director Robbie Taylor Hunt doesn’t quite capture Sean’s increasing urgency as the wedding gets ever closer, but King gives us a couple of great pay-offs. They lead to a heartwarming and encouraging ending despite the conflict between Sean’s queerness and his Catholic family’s values.

The staging is sharp and fun, and the performances are energised, making this a fairly solid production. Some dramaturgical tightening and a look at the sound levels will go a long way in helping the script cohere and the production to have a bit more polish.