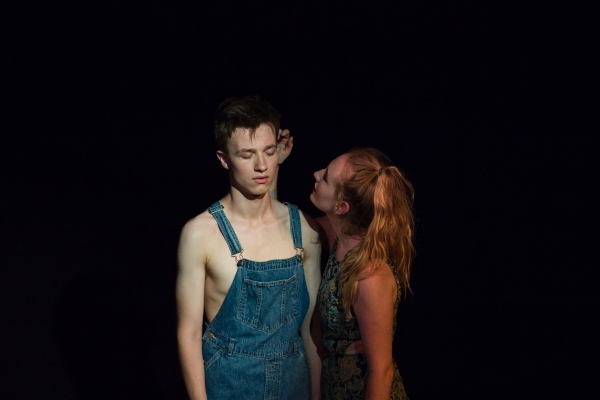 The entrance to the jungle. For some, it is the threshold to freedom, a passageway into adventure, into uncertainty and discovery.

The keeper of the gates decides who is ready for the adventure, who isn’t, who deserves to proceed, who is sent home. Once inside the jungle, animal instincts take over. Natural selection, survival of the fittest and everyone for themselves become the new guidelines. In the words of Rudyard Kipling: “Now this is the law of the jungle, as old and as true as the sky, and the wolf that shall keep it may prosper, but the wolf that shall break it must die.” Abide by the rules and your time in the jungle will be a success, break them and the outcome could be tragic.

Drawing parallels between a young boy lost in the jungle and raised by animals, and a young man’s first experience of a gay club, Man-Cub follows Mowgli on a night of highs and lows, trust and fear, success and regret. After several attempts, he is finally admitted to the jungle, where he’s welcomed by flashing lights, loud music and writhing bodies. Some of the characters of Kipling’s Jungle Book are more easily recognised than others, but they’re all there, part of this whirlwind of bodies that long for touch, contact, a personal high and an escape from daily monotony. Packs form, individuals are excluded – turning ‘I Wan’na Be Like You’ into a minor-key, gloomy tale of longing and loss. Danger, flirt, temptation, seduction, abandonment and loneliness are only a few of the things explored during the 60-minute running time.

The tone of the piece is such that it allows the spectator to lose themselves in what they are witnessing, sending everyone who has ever set foot in a night-club back to their own experiences. The physical approach is ideal for this piece, allowing bodily expressions to speak louder than words. In the rare moments when text is used, it becomes almost disruptive, pulling the audience out of the flow and then releasing them back to it. However, the spoken bits are crucial – especially Mowgli’s final monologue, where ‘Law of the Jungle’ resonates once more: ‘The jackal may follow the tiger, but, cub, when thy whiskers are grown, remember the wolf is a hunter – go forth and get food of thy own.’ Mowgli leaves the club and, altered by his experience returns to his village in the early hours of day.

More than being a play about being gay, Man-Cub explores what it means to be human, to search for some kind of fulfilment in a place filled with heat, drugs, music, alcohol, sex and hazy lights. What is it that people look for in a night out? Do they want to explore? Disappear? Seduce? Party? Maybe all of the above, maybe none. The point is that the play represents human nature in an environment that is not clouded by judgement or prejudice, but that allows instinct to take control.

Even though it is a directorial debut, the play has incredible potential and has a raw, honest and clear approach to its subject. Although some elements are a bit shaky, they are very few and more than forgivable. The piece is sexy and unapologetic which make it exciting and at the same time approachable.