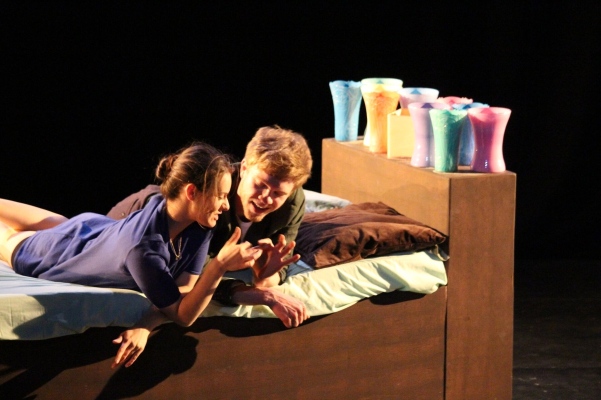 What would you do if the country was as war and under attack? Would you join up and fight? Or would you run? If you left, where would you go?

Protagonist Elizabeth lives in London with her husband Harry, who she met whilst feeding the residents of her local duck pond. Their romance is a proper fairytale, until the war starts. Writer Gabrielle Sheppard goes on to reveal the impact of the war on Elizabeth and Harry, and simultaneously shows Elizabeth’s ideal life that could have unfolded without the looming threat of attack. It’s a clever, Sliding Doors-esque device from Sheppard, though the understandable inclusion of Elizabeth’s mental trauma muddies the narrative – what is real? What are her delusions? These parallel worlds often overlap and blur, adding to the confusion. But maybe that’s the point. The refugee experience is hardly one of calm and clarity, and the disorientation of the narrative and dialogue has potential to foster empathy and understanding. It could also alienate, with the production being written off as unclear and poorly written, but hopefully this is a less likely interpretation. Leftovers is an intuitive, short piece of theatre with the ability to pluck at the heartstrings and present refugees as human beings who feel love, pain and want safety for those they love the most.

Sheppard also plays Elizabeth, showing her journey from a young woman in love to a damaged vessel who has lost everything, with great nuance and pathos. She has lovely chemistry with Christopher Adams (Harry) and Ella Cook, who plays her dog and her grown daughter.

Director Dimitris Chimonas incorporates movement sequences mainly composed of running on the spot. There’s some nice abstract, gestural work to add variation but the running is the focus. The metaphor is clear, and effectively transitions between the episodic scenes. The set, mountains of clothing, are physically obstructive but a nice representation of everything refugees have to abandon in favour of safety.

At under an hour, Leftovers feels like it has a lot more to say, with the potential of becoming a fully formed, epic love/war story. The concept is a sound one, but further clarity and lengthening wouldn’t go amiss.  The two producing companies, Hounded and Ugly Collective, are certainly worth keeping an eye on.